Standing up to Salem Special Interests 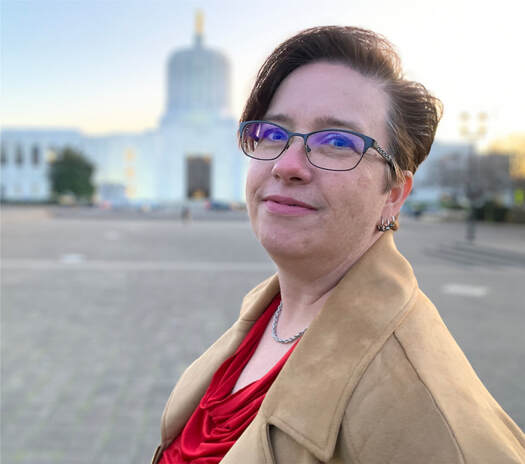 Michelle will represent the citizens of House District 3, not the Salem clout-chasers.
Republican primary voters in Josephine County have probably noticed that their mailboxes are filled with literature from several different political campaigns. Every one of them costs considerable money to produce, print and mail off to voters. It begs the question of who, exactly, is paying for all of it?

The past few years that I’ve spent working as chief of staff for Rep. Carl Wilson and Rep. Wally Hicks have given me a clear understanding of how things work in Salem. Those mail pieces you’ve been receiving were put together by political consultants who get paid regardless of whether their clients win or lose. They were paid for by lobbyists who represent special interests.

This cadre of political consultants has considerable clout at the state capitol. Many of them are, or are associated with, influential "power brokers" within the corporate lobby.

The same business lobby conspired last year to have Rep. Wilson overthrown as the House Republican Leader. Carl saw the same thing you’ve been seeing—Republican candidates losing races every election. Seats were being lost, even in years when Republicans were winning in literally every other state.

Carl was determined to do something different. The out-of-state consultants whose bad advice leads Oregon Republicans astray were all about to get fired. Unsuccessful strategies that have resulted time and again in Republican defeats were going to be replaced with candidates and campaigns that would actually work.

Those consultants got scared and turned to their cronies in the business lobby. Their apple cart was about to be overturned, and they didn’t like it. So the business lobby threatened members of the House Republican caucus into voting for new leadership that would follow its agenda without question. And that’s exactly what happened.
I launched my write-in campaign for House District 3 because Rep. Wilson’s decision to retire from the Legislature left a huge void. For months, I hoped that someone qualified would step up to serve the residents of Josephine County. But nobody did. I was worried that the good work we’ve done on the behalf of our constituents would come to a stop.

Launching a write-in campaign would be a challenge, and I knew that. But I also knew that it would be worth it to make sure that the people of Southern Oregon were well-represented.

The business lobby found out about my campaign and got scared. They knew they wouldn’t be able to control me and that I would put you, as my constituents, before them. They waited until right before the filing deadline to get their chosen candidates to file for different positions.

Do you remember the mad scramble that took place back in March, when candidates began switching which seats they were running for? That was the handiwork of the business lobby in action.

The same business lobby that had Rep. Wilson ousted from his leadership position chose those candidates, then steered campaign contributions to the consultants who put together the pieces flooding your mailbox. They’re doing all this so they can pick your next state representative. They’re doing this because they know that once I’m elected your next state representative, I won’t be beholden to them.

I owe literally nothing to those business lobbyists and consultants and won’t be doing their bidding. In fact, as your next state representative, I plan to stand up to these special interests. I’m happy to say that my broad support comes from people in Josephine County that I’ve known and worked with for years.
​
The Salem special interests don’t want me as your next state representative. But it isn’t their decision to make—it’s yours. And I hope you remember that and write me in to be your next representative for Oregon House District 3.